Over the Mothers day weekend I took part in my first craft fair. This particular one, hosted by the Victoria chapter of Etsy Artisans and was part of a broader national series of craft fairs happening in May. So, during the month of April I worked through new card plans, doing a few more plant based images and updating my birthday cards.

I was getting stuck for ideas and doodling away when it hit me. I have a set of nesting dolls brought back from Russia by my uncle ages ago on a business trip. I had only just found them again in storage, not to mention my Russian husband though they were beautiful. So I took my inspiration and set it down trying to settle on how best to represent them without directly copying the ones I had. In my initial sketch I had tried to make each doll different, with a sense of personality to each of them. While I think it would have been interesting to do, I ultimately went more simple remember that they are printed to fit on a 4.25 x 5.5 card so most of those features would be lost. Maybe that’s something for a future larger project. So my dolls when through a few phases of design before finally coming to the one below. Although I didn’t sell too many of them at the craft fair they were certainly the one that garnered the most questions and had people stopping at my table to see. 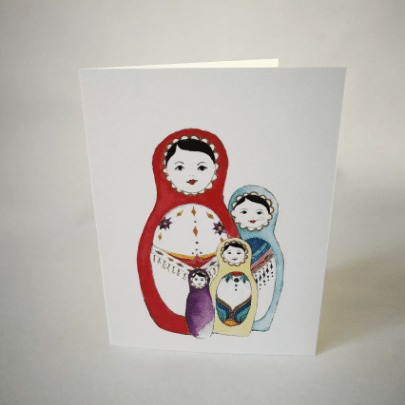